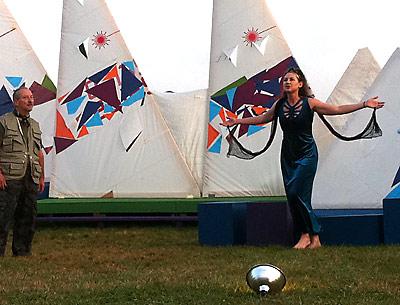 Perhaps the first thought someone might have hearing about outdoor theater on the lawn behind the Bridgehampton School would be that the traffic noise from the highway nearby is going to be loud. Dismiss the notion, because the huge brick building blocks nearly all sound from the vehicles rolling by on the other side — which is good, because being able to closely hear the roiling, if sometimes hard-to-follow, lovers’ battles and reunions in Shakespeare’s “A Midsummer Night’s Dream” is essential.

The show is Josh Perl’s baby, with production help from Peter Zablotsky, Peter Tolin Baker’s design, and Richard Horwich as its dramaturge. Mr. Perl, familiar to theatergoers here, is the guiding force behind the Naked Stage company, which hosts readings and other events at East Hampton’s Guild Hall. His staging of “Midsummer Night’s” is a traditional one and uses the wide space ofhe school lawn to good effect.

The set, curiously enough, is dominated by the cast-off sails of small boats, Lasers to be precise, whose vaguely shooting-star-like logos are appropriate for this play about the intersection of fairies, woodland spirits, common laborers, and mostly hapless Athenian aristocracy. Honestly, one might be hard-pressed to argue that Shakespeare wrote a more appropriate script to match high season on the overheated South Fork than this. Simple wood risers do little more than provide means for the large cast to come and go. Most of the play is set in a woodland grove, and so the players come forward onto the grass, closer to the audience.

The company, the Hamptons Independent Theater Festival, provides a couple of rows of metal chairs; guests may bring their own low-slung beach seating or blankets. Admission is $20.
Gerard Doyle, a seasoned actor with many United States and London credits, and Clodagh Bowyer, equally accomplished with a résumé heavy with Off Broadway and Irish theater, are the obvious standouts. Mr. Doyle’s Oberon, the fairy king, is as admirably lecherous and impulsive as his other role in the comedy, Theseus, the Duke of Athens, is measured and fair.

Ms. Bowyer’s Titania, whose custody battle with Oberon over possession of a changeling spirit, is commanding. She also plays Hippolyta to Mr. Oberon’s Theseus.

For this production, Mr. Perl put together quite the cast, 17 in all, some with plenty of stage credits; some not so much. Standouts include Ashley Brooke’s Queens (as in the borough)-accented Robin Goodfellow/Puck, and Irene Stefanik as Egeus.