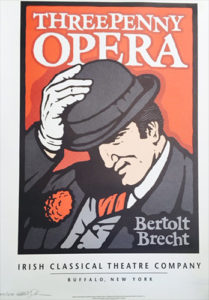 The Threepenny Opera proclaims itself “an opera for beggars,” and it was in fact an attempt both to satirize traditional opera and operetta and to create a new kind of musical theater based on the theories of two young German artists, composer Kurt Weill and poet-playwright Bert Brecht. The show opens with a mock-Baroque overture, a nod to Threepenny’s source, The Beggar’s Opera, a brilliantly successful parody of Handel’s operas written by John Gay in 1728. In a brief prologue following the overture, a shabby figure comes onstage with a barrel organ and launches into a song chronicling the crimes of the notorious bandit and womanizer Macheath, “Mack the Knife.” The setting is a fair in Soho (London), just before Queen Victoria’s coronation.