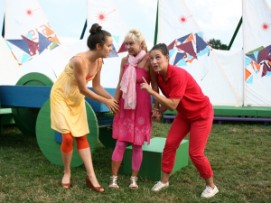 Singin’ in the Midsummer Night’s Rain

You know a production has captured an audience when even heavy rain doesn’t deter them from rooting on the players. This happened last Saturday night at the HITFest performance of A Midsummer Night’s Dream when a sprinkle turned into a storm. Director Josh Perl interrupted the action to offer the viewers shelter in a classroom to wait out the storm.

But we were all too anxious to hear more of the hysterical Ashley Brooke as Puck with dialogue dripping with sarcasm (asm-asm-asm) and how the Hermia (Licia James Zegar) – Helena (Kea Trevett) – Lysander (Kathryn Lerner) – Demetrius (Kasia Klimiuk) love quadrangle would play out! The foursome’s verbal sparring matched their physical acrobatics as they fought for their ever-changing lovers. The crowd cheered for more, and even in the rain the thespians played on.

The set design by Peter Tolin-Baker consists of sails with triangles painted on them in every shape and style. They did well to reflect the relationship triangles which created such conflict throughout the show.

The costumes were simple and very color coordinated, and as a member of the audience not particularly well versed in this Shakespeare play it helped keep track of the different groups in the show. The Athenians, for example, wore shades of orange and denim or blue. Not only did they look fabulous and ferocious (especially Holly Goldstein who played Starveling, the original cowardly lion in their “play within a play”) but they were well defined as a troupe within the cast.

I thoroughly enjoyed this production, quick pacing, great comedic timing, and even some challenging stage combat. So don’t make a Bottom sized “ass” of yourself- see the show! They enter their closing weekend tonight.

Performances are Thursday through Sunday at 7 p.m. at the Bridgehampton School grounds. $20 for tickets so come rain or shine! But do leave the umbrellas at home — bring a poncho. (The folks sitting behind you will greatly appreciate it!)